Here at Ray of Hope, Canada Day isn’t all we’ve been celebrating recently. This month, we have a good news story to share about a participant in our Open Custody program. The enthusiasm this young man showed while he was with us made a real impression on our staff and gives us all hope for his future.

Of course, success stories like Jon’s wouldn’t be possible without the support of people like you who offer their prayers, time and treasure to care for those in need. It’s our pleasure to introduce you this month to Bruce, a long-time donor who explains why he and his wife Beth chose to give to Ray of Hope.

We hope you enjoy the issue and we’ll see you next month!

Tools for a new life

In Ray of Hope’s Open Custody facility, young men between the ages of 12 and 17 receive guidance and support as they carry out their court-appointed sentences and re-enter society. Through programs that focus on life skills, education, spiritual discovery and sports, as well as a work program and trades training, they learn to develop healthy relationships and work toward positive change in their lives.

Here is one young man’s experience in Open Custody, shared with his permission.

Jon* arrived at Open Custody just before Easter. He was nearing the end of his sentence and his good behaviour had earned him the chance to complete the remaining three months in a less restrictive program. From day one, he seemed determined to make the most of the opportunity.

“Jon was like a sponge,” says Robert Vermette, Open Custody’s Shift Supervisor. No matter what activity he was involved in, he was polite and engaged, eagerly soaking up information and new experiences. He seemed to especially enjoy activities that involved working with his hands.

Jon’s arrival coincided with the beginning of pandemic restrictions. Many of the sports and recreation opportunities that Open’s youth participate in were no longer available, and family visits weren’t possible. So, to keep the teens busy, staff devised new activities that could be done safely on the property. With their encouragement and supervision, Jon helped to create a garden and enjoyed learning about woodworking and car maintenance.

In addition, Jon kept up with his schoolwork. He earned a high school credit with a grade of 90%, despite never actually meeting his teacher. He also completed 30 hours of court-ordered community service, which involved janitorial and maintenance work around the facility.

Once the pandemic struck, meeting in groups for Chapel was no longer possible, but Chaplain John Murray continued to meet individually with the young men.

“Jon was extremely interested in the Christian faith,” Chaplain John says. “We had numerous in-depth discussions on faith and living the Christian life. He had some great questions as well throughout this time.  Together, we watched and discussed the Bible Series, the Bible AD Series and the movie, Paul: Apostle of Christ.  Thus, we had numerous excellent discussions.”

When Jon returned home, he took with him a Bible and other devotional material that Chaplain John had given him. “It was my joy and privilege to serve and shepherd in this way. He is a special young man!” Chaplain John says.

In some ways, Robert says, custody is an artificial experience compared with the lives program participants may be returning to. Staff are always available to interact with the youth, from playing video games to teaching them new skills.

“What happens next for Jon depends on the support he gets when he returns home and whether or not he chooses to go back to the same friends and activities that led him into trouble.”  On a hopeful note, Robert notes that Jon’s dad works in construction and after his time at Open, Jon has expressed interest in similar work.

We can’t tell what Jon’s future will be, but now that he’s been exposed to healthy experiences and had the chance to learn new skills, we hope he’ll use them to build a different path for himself.

Below, staff share photos of Jon’s time at Open.

*Jon is not his real name – we’ve changed it to protect his identity. All pictures are used with Jon’s permission.

From seeds to sandwiches

At the end of April, Jon helped staff build this elevated garden using recycled lumber from an old stage at the Ray of Hope Community Centre.

He helped plant seeds and then transplanted the seedlings into the prepared bed.

Less than a month later, Jon and Alyssa harvested lettuce and radishes to make BLTs.

On a visit to a greenhouse, Jon bought begonias and a hot pepper plant for his mother.

“On the ride home, Jon asked if we could build a small planter for the pepper plant,” Robert says. Staff members brought in a discarded skid from a local business and, with Dan’s help, Jon built the planter for his mom.

Gardening and woodworking weren’t the only practical skills Jon was exposed to in his time at Open.

“Jon mentioned he did not know how to change a tire,” Robert says, “so we created an afternoon project where he helped take the snow tires off a car. He learned safety tips first and then with staff supervision, got to use power tools for the first time and learned how to torque the tires.” 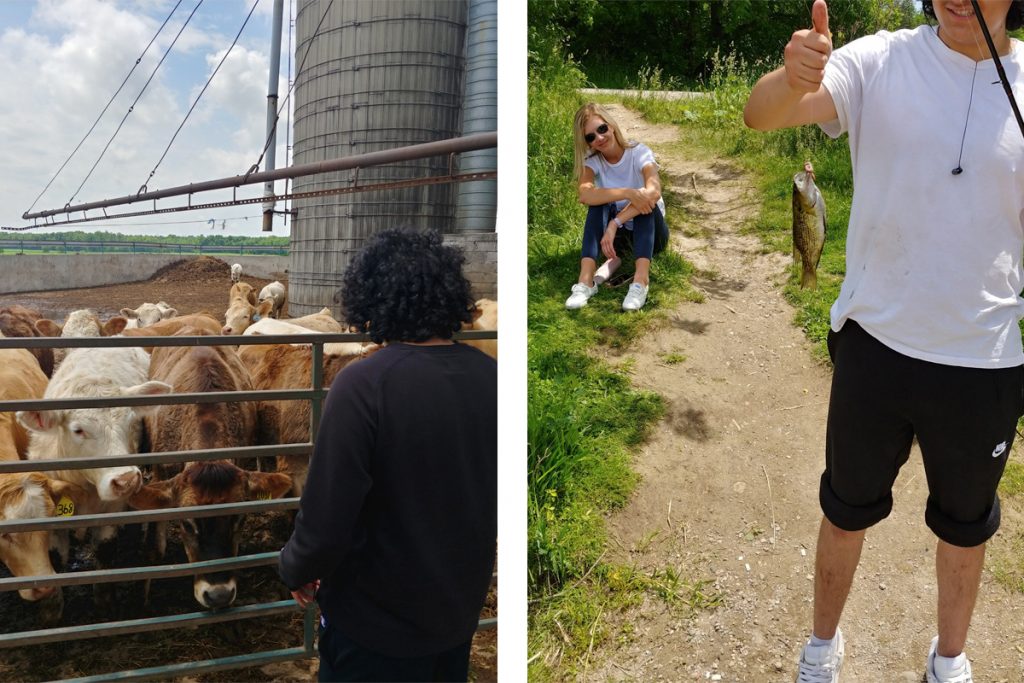 Fishing and a farm visit

As the weather improved and the province relaxed health restrictions, staff were able to offer Jon and the other youth activities outside the facility. Growing up in a large city, Jon had few opportunities to experience rural life and outdoor recreation. A visit to a nearby Mennonite farm gave Jon his first chance to see cows up-close. On another trip, Robert says, “Jon was so proud of this fish he caught.” (The fish was then released.) 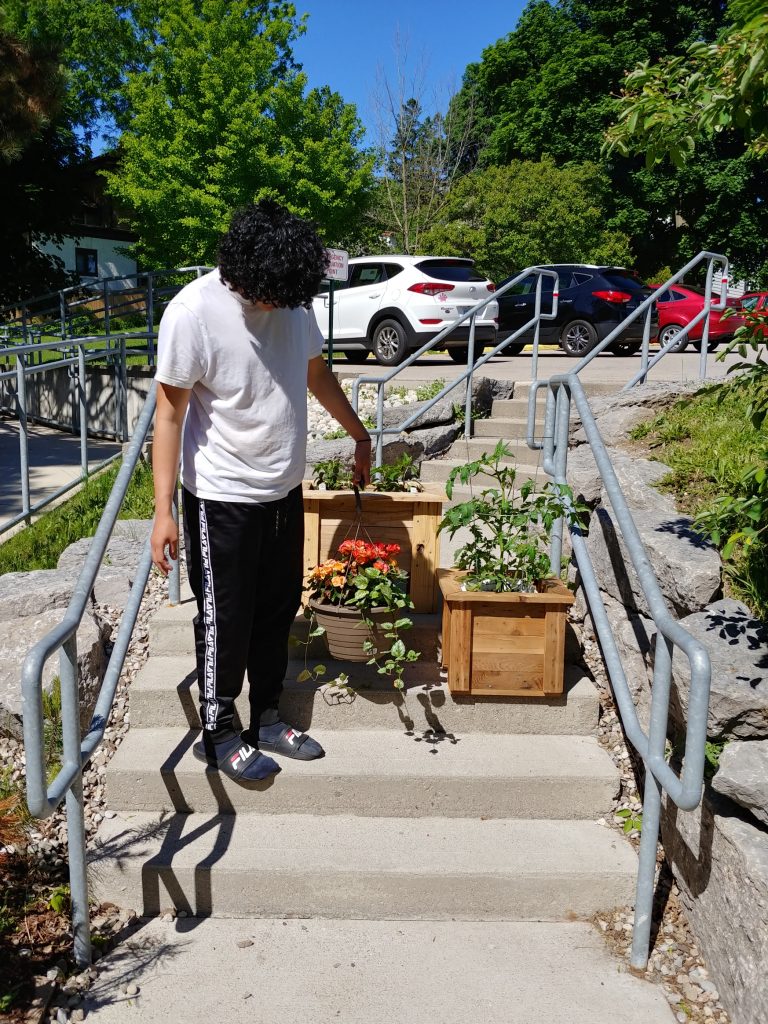 On his way home, Jon shows off his begonia plant and the planters he made (one contains the pepper plant he bought for his mom). In his time at Open, Jon was exposed to new experiences and skills that he will hopefully draw on to begin a new chapter in his life.

Above: Longtime supporters of Ray of Hope, Bruce and his late wife Beth.

We love sharing stories about our programs and the people they support. We also like to highlight the generous donors who make that support possible. This month, meet Bruce Fournier, a long-time friend to Ray of Hope. 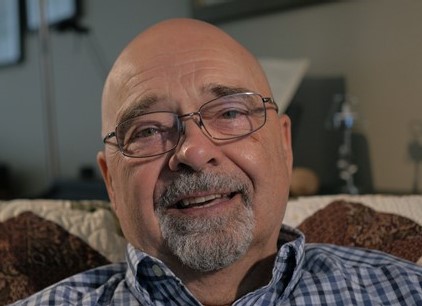 When you ask Bruce Fournier about himself, he says modestly that he’s “just an old bald guy who’s retired.” But dig a little deeper and fascinating stories emerge.

Stories about his early career as a squadron leader with the Canadian Armed Forces, hunting Russian submarines and conducting search-and-rescue missions in Arctic waters. About his time at Wilfrid Laurier University, where he was a professor and associate dean of business. About meeting his wife Beth and raising three biological and two adopted children together. And about the years when he and Beth served as Executive Pastor and Executive Assistant, respectively, at Lincoln Road Chapel, retiring in 2014, after 12 years of service. Sadly, Beth passed away shortly after.

Through the years, Bruce and Beth donated regularly to Ray of Hope. They sponsored participants in the Coldest Night of the Year and Ride for Refuge events. They also supported our youth programs by sponsoring golfers who play in the annual Ray of Hope Golf Classic tournament.

How did Bruce become involved with the organization? It all started when Bruce met Chuck McBride and other staff members who worked in Ray of Hope’s closed custody program at the time.

As a father of five and someone who spent many years as an educator, it was natural that Bruce would be interested in youth programs. But what really struck him was hearing the men speak about their work.

“They talked about how they cared for these young men. They were dealing with some of the toughest kids, but they did it with love, compassion, faithfulness and patience.”

Bruce has since met other people who are involved with Ray of Hope as staff, board members and volunteers. “I saw the quality of the people who were participating, and I saw their excitement and commitment to Ray of Hope. And I thought ‘OK, this must be a good thing.’”

Over the years, Bruce says he’s been impressed with the breadth of programs Ray of Hope offers and the organization’s willingness to try new things.

“There’s been lots of innovation and that is interesting. But underlying all the programs is a real spirit of caring. Because of the quality and attitudes of the people I saw at Ray of Hope, I felt it was a very safe place to give, knowing the funds would be well used.”

“The family of God is a beautiful thing. It’s a privilege to participate as part of that family and that’s what Ray of Hope does. It offers the privilege of being involved in other people’s lives.”

Help a neighbour in need

When you give, you make life a little easier for struggling neighbours. Thank you!

During the COVID-19 outbreak, we’re not able to accept donations of food or clothing. But you can still provide meals for hungry people through our secure donation page.